Human beta-2-microglobulin (β2-MG) is an 11.6 kDa non-glycosylated protein of 99 amino acids, which is the light chain of human leucocyte antigen-I (HLA-I) and can accumulate to cause serious dialysis-related amyloidosis (DRA) in long-term hemodialysis patients. It can be used for specific elimination of β2-MG from serum and can induce apoptosis of several types of tumor cells, and thus has great therapeutic potential. In addition to its physiological function, much clinical interest has been drawn to β2-MG as its increased serum levels and misfolding have been linked to a pathological condition.

β2-MG proteins specifically react with anti-β2-MG monoclonal antibodies（CSB-DA003CmN③and CSB-DA003CmN⑦）precoated onto latex beads to form insoluble complexs, resulting in turbidity increasing, and then the increasing of absorbance is detected by automatic biochemical analyzer. Our in-house assays have a linear detection range from 0-18 mg/L.The calibration curve was fitted according to the relationship between absorbance values and β2-MG concentrations (Fig.1). 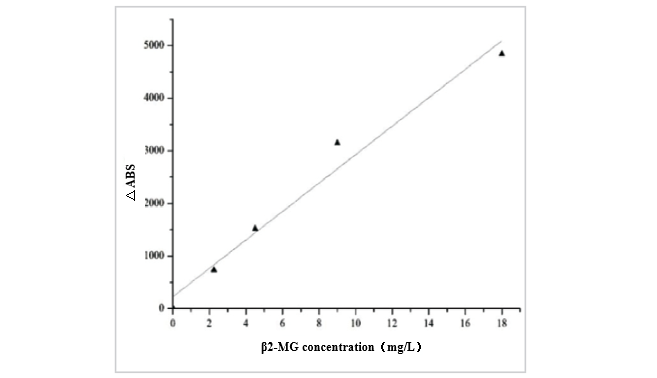 A set of β2-MG calibrators with the concentration of 0、0.1、0.2、0.5、1、2 and 5 mg/L was detected on CUSAg LFIA platform using two anti-β2-MG monoclonal antibodies. The capture antibody was stripped on the nitrocellulose membrane, and the detection antibody was conjugated to colloidal gold. The best selected MAb combination for the development of semi-quantitative humanβ2-MG immunoassays is (capture-detection): CSB-DA003CmM⑥-CSB-DA003CmM⑤ 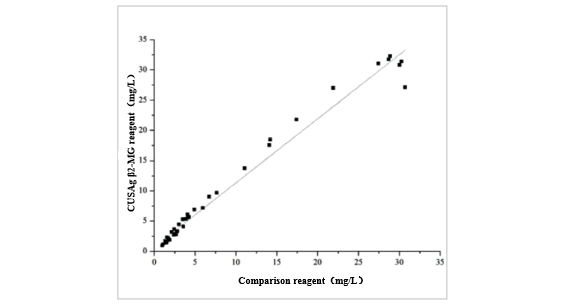 20 samples from apparently healthy donors and patients were detected with the CUSAg LFIA β2-MG assay. As shown in Fig.4, the detection signals of T line were proportional to the concentration (0.06-31.3 mg/L) of the β2-MG in the sample tested by commercial kit. 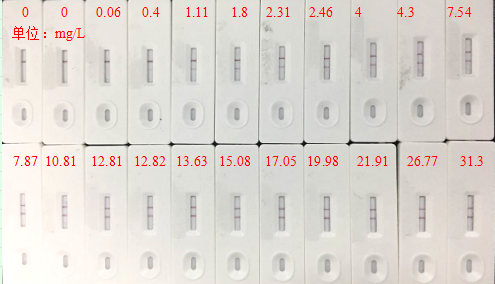 A certain amount of excellent β2-MG protein (Cat:CSB-DP003A) is also offered by CUSAg. It can be used as calibrator in immunoassay.