Cystatin-C(CYSC) is a non-glycosylated, low molecular weight, cation protein that is regularly synthesized by most nucleated cells. Cystatin-C is an endogenous protein that is known to be affected little by age, race, and muscle mass. It is not only used as a biomarker of renal function but also has positive as­sociations with obesity, insulin resistance, hypertension, and cardiovascular mortality. Higher levels of serum cystatin-C were associated with increased prevalence of diabetic conditions.

A new generation of anti-CYSC monoclonal antibodies, which was recently produced by CUSAg, makes possible the development of LETIA assay. Anti-CYSC monoclonal antibodies can be used for a broad range CYSC assay, which is a simple, rapid, sensitive and homogeneous assay that can be performed using automated systems for high-throughput immunoassays. 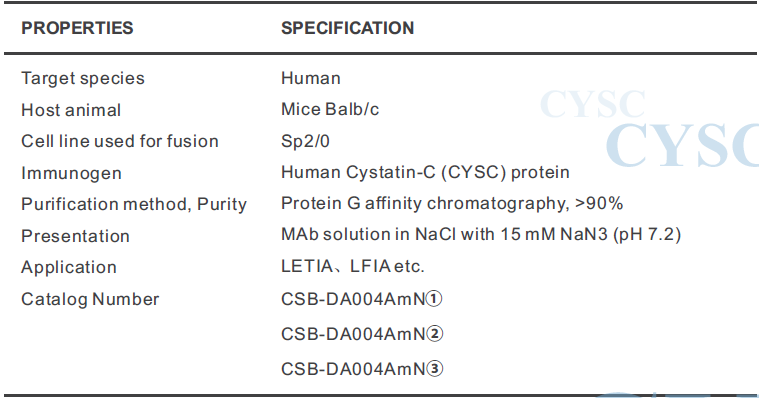 Two levels of CYSC serum were analyzed in replicates of three at two separated timeon the CUSAg LETIA assay. Data from this study are summarized in the below table.1, the relative bias was <5%.

Two members of serum samples based panel were assayed, using a single lot of reagents, in replicates of ten on theCUSAgLETIA assay(from 0.47 to 1.09 mg/L as normal). As shown in table.2, the system shows excellent precision with CV≤5%.

Anti-CYSC monoclonal antibodies were also evaluated in medium-scale clinical trials with random blood samples fromdonations (n=50). Fig.4 shows that the correlation coefficient (r) is as high as 0.99 between in-house CYSC assay and commercialLETIA assay. These results show good agreement between the two systems. 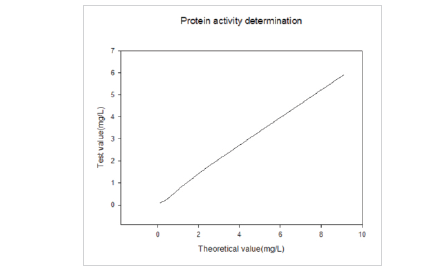