Retinol Binding Protein 4（RBP4) belongs to the lipocalin family and is the specific carrier for retinol (vitamin A alcohol) in the blood. It delivers retinol from the liver stores to the peripheral tissues. In plasma, the RBP-retinol complex interacts with transthyretin, which prevents its loss by filtration through the kidney glomeruli. A deficiency of vitamin A blocks secretion of the binding protein posttranslationally and results in defective delivery and supply to the epidermal cells.

Retinol-binding protein 4 has recently been described as an adipokine that contributes to insulin resistance in the AG4KO mouse model. It is secreted by adipocytes, and can act as a signal to other cells, when there is a decrease in plasma glucose concentration.Mutations in the RBP4 gene have recently been linked to a form of autosomal dominant microphthalmia, anophthalmia, and coloboma (MAC) disease.

RBP4 proteins specifically react with anti-RBP4 monoclonal antibodies precoated onto latex beads to form insoluble complexes, resulting in turbidity increasing, and then the increasing of absorbance is detected by automatic biochemical analyzer. The calibration curve was fitted according to the relationship between absorbance values and RBP4 concentrations (Fig.1). 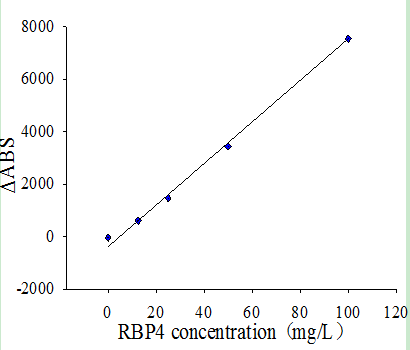 The high-value RBP4 serum was two-fold serially diluted with physiological saline, and measured on our CUSAg LETIA platform. Fig.2 showed that the measured RBP4 concentrations were gradually declined along with the serial dilution of blood samples. 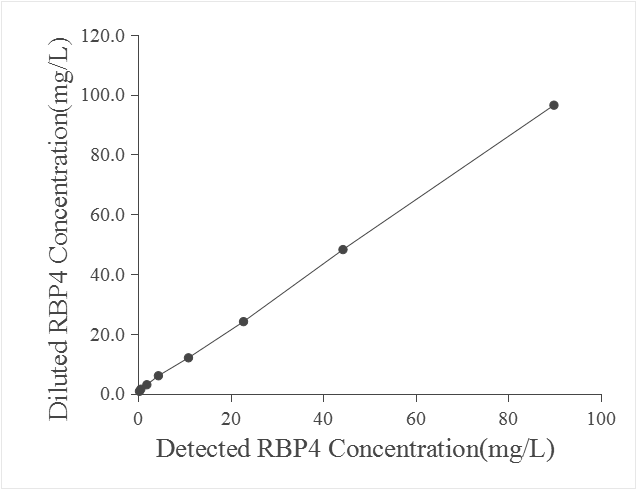 Fig.2 Determination of the RBP4 concentration by serial dilution of clinical serum

Two levels of RBP4 blood samples were analyzed in replicates of three using ouranti-RBP4 monoclonal antibodies on the CUSAg LETIA platform. Data from this study are summarized in the following table, the relative bias was <1%.

Table 1. Analysis of the accuracy of CUSAg RBP4 assay

Blood samples of control low and control high were repeatedly measured 10 times using self-made reagents with CUSAg RBP4 antibody. The CV% of two are all <1%, as shown in table 2.

Mouseanti-humanRBP4 monoclonalantibody was prepared into latex reagents, and then the antibodieswereheat-treatedat37°Cfor 14daysand used to detect RBP4  antigens.Table3 revealed the detection performance ofmonoclonalantibodies exposed at 37°C had no significant change compared to that at 4°C. These results showed that the antibody was thermostable.

Table 3. Comparison of detection performances of anti-human RBP4 monoclonal antibodies at 37°C and 4°C for 14 days

A certain amount of excellent RBP4 protein (Cat: CSB-DP002A) is also offeredby CUSAg . It can be used as calibrator in immunoassay.

2. Glucose transport and sensing in the maintenance of glucose homeostasis and metabolic harmony.The Journal of Clinical Investigation. 2006,116 (7): 1767–75.