Adiponectin(ADPN) is a protein hormone that is express and secreted by adipose tissue. It's abundant in the blood circulation, About 0.01% of total human plasma protein. It plays an important role in regulating insulin sensitivity and glucose metabolism.

Human adiponectin monomer is composed of 244 amino acids, including four regions: N-terminal signal peptide, non-homologous region, collagen repeat sequence and globular carboxyl-terminal. Collagen repeat sequence has great correlation with the evolution of species.Adiponectin occurs in the blood in many subtypes, Monomer adiponectin (28kDa) is first polymerized into biologically active trimer (65 kDa) in adipocytes, and then on this basis into hexamer (150 kDa) and high molecular weight asymmetric bouquet like adiponectin (18-36 monomers, >280 kDa) and secreted into the circulating blood.The plasma adiponectin properties of normal subjects were stable, and several subtypes of adiponectin did not convert to each other. 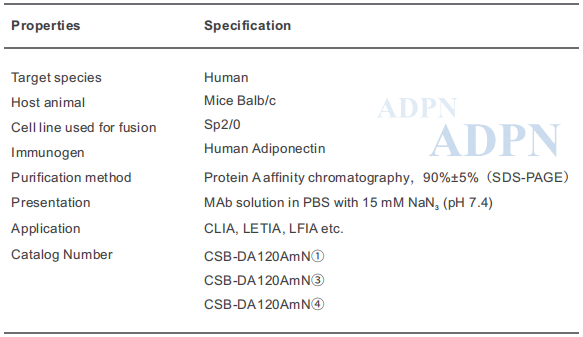 The humanADPN protein reacts with the anti-humanADPN antibody coated onto latex microspheres, resulting in agglutination and increase in turbidity. The changes in absorbance are then measured using a spectrometer to quantitatively measure theADPN concentration in the samples. As shown in Figure 1, there is a significant linear correlation between the ADPN concentration and delta absorbance. 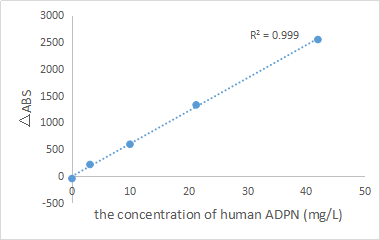 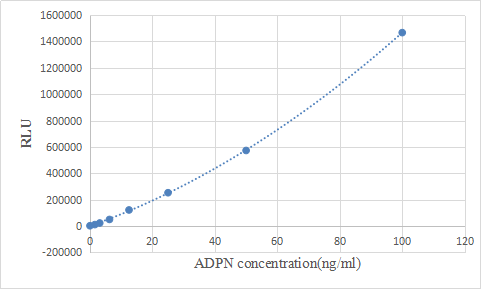 A set ofADPN calibrators with the concentration of 0-40 ug/mL was detected on CUSAg LFIA platform using two anti-ADPN monoclonal antibodies. The capture antibody was stripped on the nitrocellulose membrane, and the detection antibody was conjugated to fluorescent microspheres; The best selected MAb combination for the development of semi-quantitative humanADPNimmunoassays is (capture-detection): 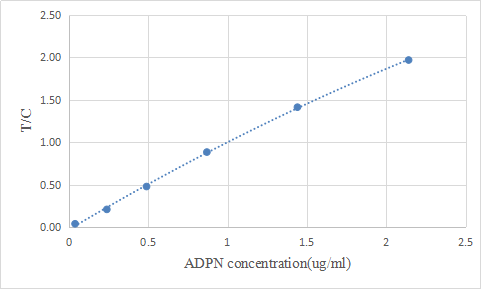 Fig.5 The comparisons between CLIA ADPN  and high-quality kits

39 samples from apparently healthy donors and patients with  type 2 diabetes were detected with the CUSAg LFIAADPN assay. As shown in Fig.6, the detection signals of T line were proportional to the concentration of theADPN in the sample tested by commercial kit. Correlation up to0.92,Blank check out limit 0.017ug/ml; linearity range1.5-40 mg/L,Degree of precisionCV＜15%.

Fig.6 Quantitative detection of the concentration of theADPN in the blood samples and high-quality kits

A certain amount of excellent ADPN protein (Catalog Number CSBDP120B) is also offered, it could be used as calibrator in immunoassay