Neutrophil gelatinase-associated lipocalin (NGAL) is a novel early marker of acute kidney injury (AKI) for which it has been shown that it can also be released from the injured myocardium. It is a small protein expressed in neutrophils and in low levels in the kidney, prostate, and epithelia of the respiratory and alimentary tracts.

Under normal conditions NGAL levels are low in urine and plasma but rise sharply within 2 hours from basal levels in response to kidney injury to reach diagnostic levels within a very short time - as much as 24 hours or more before any significant rise in serum creatinine.

Because NGAL is protease resistant and small, the protein is easily excreted and detected in the urine. NGAL levels in patients with AKI have been associated with the severity of their prognosis and can be used as a biomarker for AKI. NGAL can also be used as an early diagnosis for procedures such aschronic kidney disease, contrast induced nephropathy, and kidney transplant. 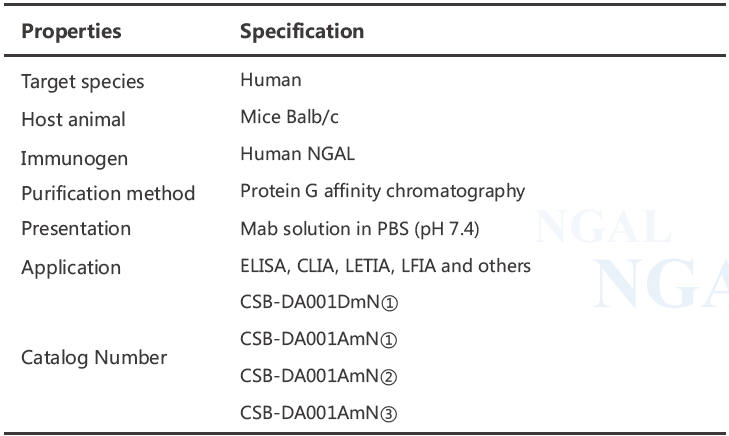 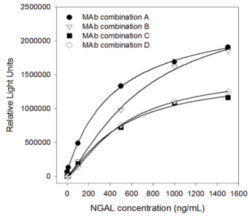 Anti-human NGAL monoclonal antibodieswere also evaluated via CUSAg latex-enhanced immunoturbidimetric assay. A set of NGAL calibratorsreacts with specific antibodies coated onto microparticles to form an insoluble complex which can be measured turbidimetrically at a series of different wavelengths (Fig.2). 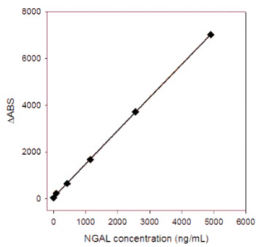 I.A study was performed where 50 specimens were tested using different antibody combinations (A, B, C and D) on the CUSAg CLIA platform and compared to a high-quality comparison assay. Data from this study were analyzed and summarized in the following figure (Fig.3). Results showed the four combinations have correlation coefficients (r)> 0.90.

II. In order to meet the application of CUSAg anti-NGAL MAbs on LETIA platform, 40clinical blood samples were separately tested using mixed MAbs on the CUSAg LETIA platform and compared to a commercial diagnostic kit. The correlation coefficient between the two systems is over 0.90.

Our anti-human NGAL monoclonal antibodies presented in PBS buffer without anypreservative were stored at -20°C, 2-8°C and 37°C for 15 days, respectively. During thisperiod,the titers of four MAbs weredetermined per 3 days, respectively. Fig.5 shows the relative titers of the MAbs treated at -20°C or 2-8°C were similar with that at 37°C. All the MAbs werestable from-20°C to 37°C. 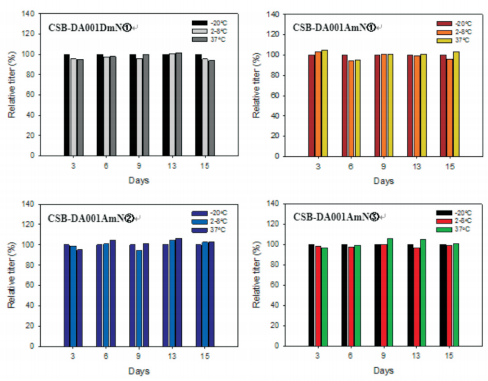 Anti-human NGAL polyclonal antibody has been developed by CUSAg for more than 5 years,and it was characterized indetail during this time. Theantibodies are widely used in commercial NGAL immunoassay. In addition, the antibodies are used in research applications such as Western blotting, immunohistochemistry and many others. 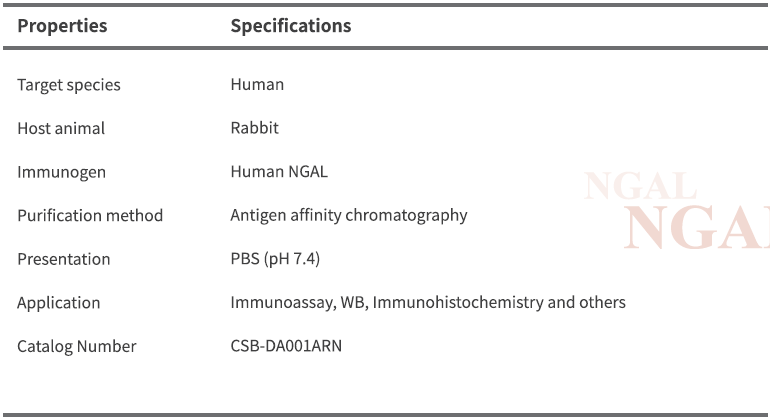 NGAL antigens specifically react with anti-human NGAL polyclonal antibodies which were precoated onlatex beads, resulting in agglutination and increase in turbidity. The calibration curve was fitted according to the relationship between absorbance values and NGAL concentrations (Fig.1). 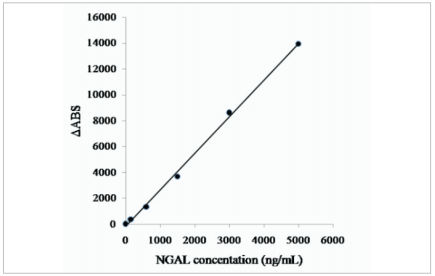 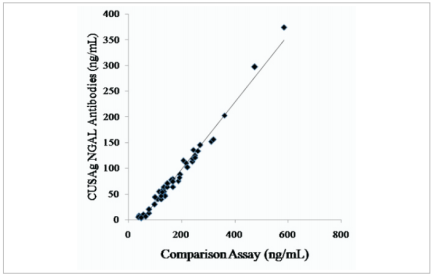 Anti-human NGALpolyclonal antibodies presented in PBS buffer without anypreservative were stored at 37°C and 4°C for 7 days, respectively. And then the antibodies were prepared into latex reagents and used to detect NGAL antigens. Table 1 revealed thedetection performanceofpolyclonal antibodies exposed at 37°C had no significant change compared to that at 4°C. These results showed that the antibody was thermostable.

A certain amount of excellent NGAL protein (Cat:CSB-DP001A) is also offered by CUSAg. It could be used as calibrator in immunoassay and applied on Western Blotting.