Ferritin(FER) is a globular protein complex of 450 kDa consisting of 24 protein subunits and is the primary intracellular iron-storage protein in both prokaryotes and eukaryotes, keeping iron in a soluble and non-toxic form [1]. It occurs normally in almost all tissues of the body but especially in hepatocytes and reticuloendothelial cells, where it serves as iron reserve. Ferritin is aslo present in the serum in minute amounts, where it appears to reflect iron stores in normal individuals.

A high serum ferritin value is seen in hemochromatosis and other iron-overload states, as well as cute hepatitis, Gaucher disease, malignancies, and chronic inflammatory disorders.


Anti-Human Ferritin Monoclonal Antibodies
A new generation of unique anti-ferritin monoclonal antibodies, which was recently produced by CUSAg, makes possible the development of highly sensitive and rapid sandwich immunoassays. Our in-housechemiluminescent immunoassays have a linear detection range from 2.5 to 600 ng/mL. All recommended MAb combinations were evaluated in medium-scale clinical trials with blood specimens from anemia, normal and inflammatory patients. 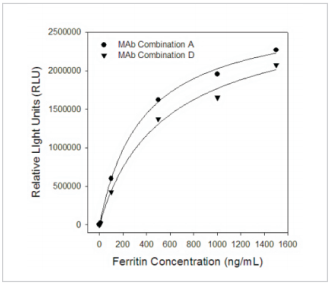 Anti-human ferritin monoclonal antibodieswere also evaluated by CUSAglatex-enhanced immunoturbidimetric assay (LETIA). A set of ferritin calibratorsreacts with specificantibodies coated onto microparticles to form an insoluble complex which can be measured biochemical analyzer at a series of different wavelengths (Fig.2). 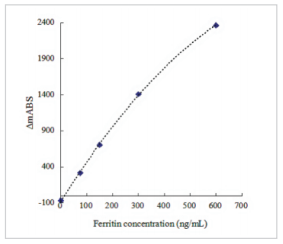 The CUSAg CLIA Ferritin assay is designed to have a correlation coefficient (r) of >0.90. A study was performed where lithium heparin plasma specimens were tested in replicates of three using different antibody combinations on the CUSAg CLIA platform and compared to a commercially available diagnostic kit (Comparison Assay). Data from this study were analyzed using the Passing-Bablok regression method and are summarized in the following table and scatted plot (Fig.3). Results show good parallelism between the two systems. 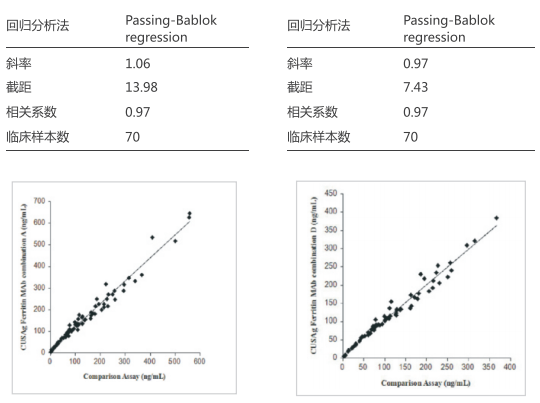 In order to meet the application of CUSAg anti-ferritin MAbs on LETIA platform, 35clinical blood samples were separately tested usingmixedMAbs on the CUSAgLETIAplatform and compared to a commercial diagnostic kit. Thecorrelation coefficient between the two systems is over 0.98.

Our anti-human ferritin monoclonal antibodies presented in PBS buffer without anypreservative were stored at -20°C, 2-8°C and 37°C for 15 days, respectively. During thisperiod,

the titers of four MAbs weredetermined, respectively. Fig.5 shows the relative titers of the MAbs treated at 37°C or 2-8°C were similar with that at-20°C. All the MAbs werestable from-20°C to 37°C. 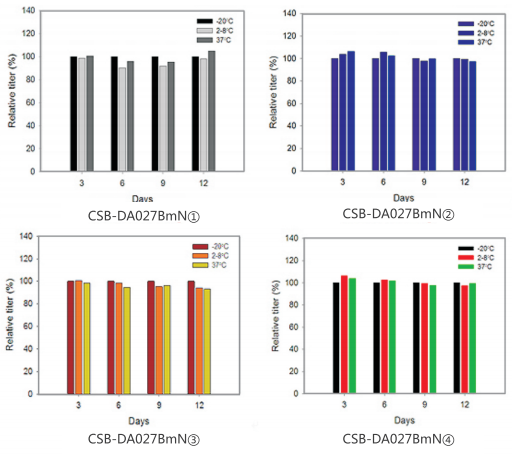 Ferritin light chain is a protein that in humans is encoded by the FTLgene. This gene encodes the light subunit of the ferritin protein, Ferritin is the major intracellular iron protein in prokaryotes and eukaryotes. It is composed of 24 subunits of the heavy and light ferritin chains.The recombinant ferritin light chain protein (Cat:CSB-DP027B) is also offered by CUSAg. It could be used as calibrator in immunoassay and applied to western blotting.