Human beta-2-microglobulin (β2-MG) is an 11.6 kDa non-glycosylated protein of 99 amino acids, which is the light chain of human leucocyte antigen-I (HLA-I) and can accumulate to cause serious dialysis-related amyloidosis (DRA) in long-term hemodialysis patients. It can be used for specific elimination of β2-MG from serum and can induce apoptosis of several types of tumor cells, and thus has great therapeutic potential. In addition to its physiological function, much clinical interest has been drawn to β2-MG as its increased serum levels and misfolding have been linked to a pathological condition. 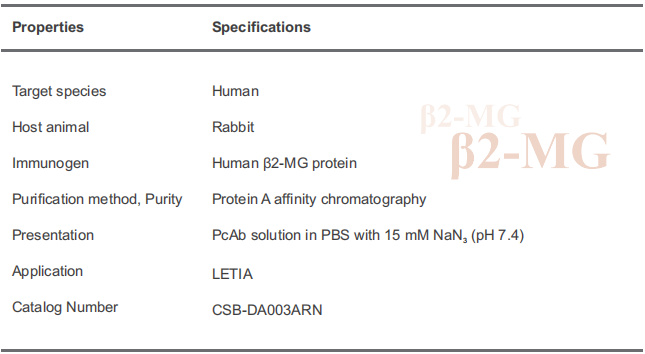 β2-MG proteins specifically react with anti-β2-MGpolyclonal antibodies precoated onto latex beads to form insoluble complexs, resulting in turbidity increasing, and then the increasing of absorbance is detected by automatic biochemical analyzer. Our in-house assays have a linear detection range from 0-80 mg/L.The calibration curve was fitted according to the relationship between absorbance values and β2-MG concentrations (Fig.1). The high-value β2-MG serum wastwo-fold serially diluted with physiological saline, and measured on our CUSAg LETIA platform. Fig.2 showed that the measured β2-MG concentrations were gradually declined along with the serial dilution of blood samples. Fig.2 Determination of the β2-MG concentration by serial dilution of clinical serum

Anti-β2-MG polyclonal antibodies were also evaluated in medium-scale clinical trials with random blood samples from donates (n=50). Fig.3 showed that the correlation coefficient (r) is as high as 0.98 between in-house latex reagents and commercial β2-MG immunoassay. These results show good agreement between the two systems. A certain amount ofexcellent β2-MG protein (Cat: CSB-DP003A) is also offered by CUSAg . It can be used as calibrator in immunoassay.